We've been finding a common problem on the New Volkswagen Beetle.  The symtoms are no compressor or condenser fan operation.  If you have one of these in your shop, check this first...

There's a small fuse panel on top of the battery.  There you'll find three 30 amp fuses along the upper right hand corner of the fuse block.  One or two of these fuses, which tie into the fan control module, may burn at the leg of the fuse.  Notice the burn in the slot where our green 30 amp fuse was located.  This caused a bad connection which kept the compressor and fans from getting power. 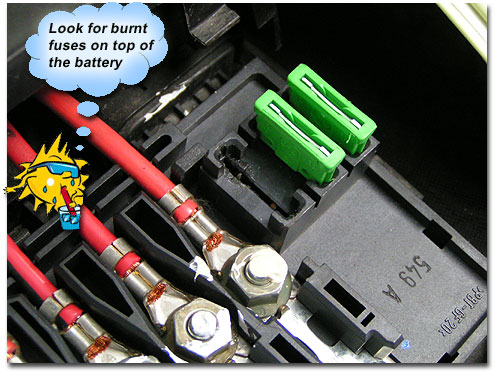 The photo below shows we have power at the bad terminal.  In this case, checking with a test light only proves the fuse is good.

We recommend pulling each fuse to make a visual inspection.   In this 2001 New Beetle, we were able to rock the fuse a little and get the compressor and fans to engage. 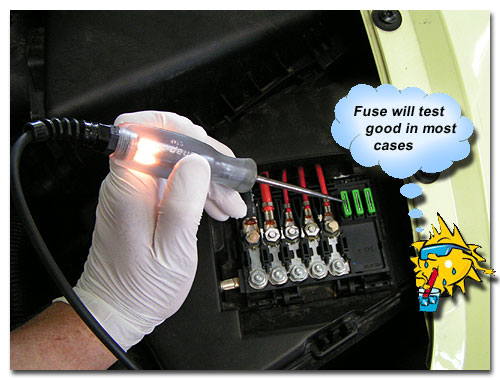 This makes for a quick and easy repair if you know where to look.  To fix this problem you'll have to disconnect the battery and replace the fuse panel.  It's inexpensive, and should be readily available from your local Volkswagen dealer.  Unlike some parts on the New Beetle, this fuse block is easy to replace.

Tip: Make sure you record the location of each wire before removing the nuts that hold them to the block.  Each wire is connected to it's own specific fusible link.  Also, the new fuse block may not come with any fuses, so be sure to note the correct location of each fuse.